In my previous post I talked about how it was mine and Mark's 1st year wedding anniversary this past weekend and that we went away to Tofino, B.C. for a couple of days to celebrate since we never did a honeymoon.

Well, today I am going to elaborate more on the adventures of our little get-away and show you all the photos of the beautiful island!

We did the road/ferry trip with two other couples (Rob & Bridget, and Steve & Danielle) and our puppy, Captain Axel. Don't worry, even though we had a full car, Mark and I made sure we took some time just for ourselves during the trip in order to celebrate our 1st year wedding anniversary.

The six of us rented a beautiful house about a 5 minute walk from Chestman Beach.

It had a full kitchen, living room, two bathrooms, laundry room, three bedrooms and a loft. Plenty of space for all of us. Each couple brought several grocery items and then we also did a couple little shopping trips to just pick up whatever we wanted to cook that day or night. It was fun cooking along side other couples, and generally speaking everyone took turns preparing, cooking, or cleaning up after meals so it never really felt like a whole lot of work. 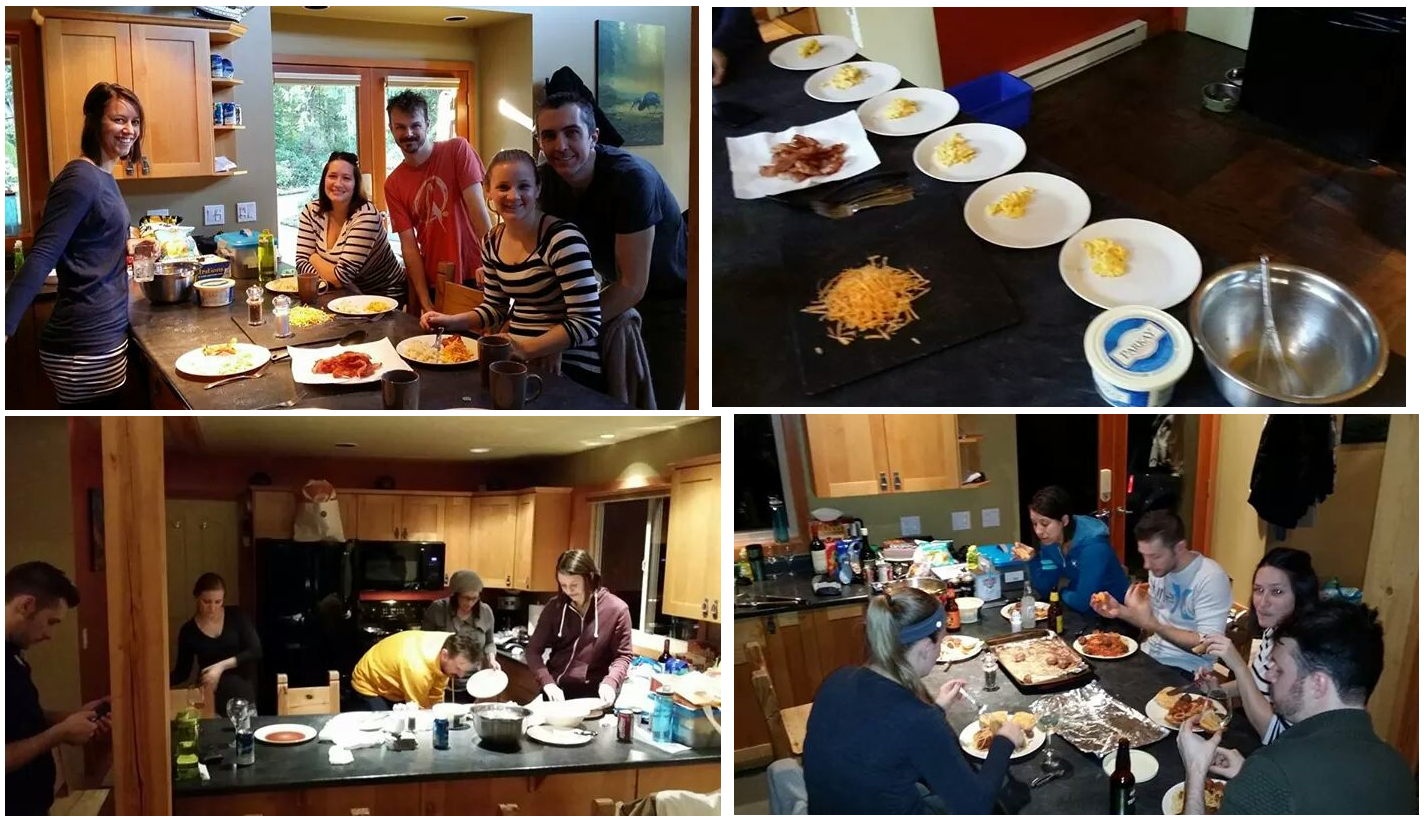 We arrived at the house around 6pm on Friday and by the time we picked up some booze, and groceries, and had dinner made, we were all pretty pooped. We ended up playing a couple rounds of Taboo (boys vs. girls, and sadly the boys whooped our butts), and then headed into the hot tub for a relaxing night under the incredibly star lit sky.

Saturday we all slept in pretty late, but had a scrumptious bacon and egg breakfast to get our late morning in gear. After filling up on breakfast, we loaded in the car and did a quick fifteen minute drive down to Wickaninnish Beach.
After the beach, Saturday night included more cooking together and some board games. Mark and I also took some time to lounge in the hot tub for a bit on our own, while the other couples hung out inside. As usual, the whole night was filled with easy conversations, laughing and joking! We all went to bed a little bit earlier than the previous night, but Mark and I snuggled in bed until midnight waiting for our anniversary to exchange "gifts."

Mark and I typically don't do gifts for each other for gift giving occasions (i.e. Christmas, birthdays, anniversaries, etc.), but we usually try to do soooomething small or sentimental just to remind each other we are thinking of them. For this specific occasion I got Mark a little book called "What I love about you by me". It is a small book, with a bunch of fill in the blank prompts on reason why I love you. I then also got us a three year double journal. It basically has once a day prompts that each person fills in their response but it's over the course of three years, so you get to see how each others thoughts/opinions/plans compare and change over the course of the years. No guarantee that we will last writing in it consistently for three years, but I thought it would be something fun and different to try.

Mark's gift to me was a small letter. It was just something short, but basically a little love note reminding me why and how he loves me. Very sentimental and truly from the heart. Oh, and he also gave me a pack of socks, haha (odly enough, a pack of socks was one of the very first "gifts" Mark ever gave me, before we were even officially a couple), leave it to the hubby to buy me socks so that he can wear them himself! But that's why I love him!

And now, on to the next day.

Sunday, November 30, was Mark and my first year wedding anniversary. We slept in until about 9am and then did breakfast again with the group. We had waffles (with some vanilla/cinnamon baileys - you've got to start the day on the right foot) and fresh fruit. After tidying up we headed, basically across the street, to Chesterman Beach.

Now Chesterman Beach is pretty neat, because if the tide is out you can walk all the way out to Frank's Island (you just have to make sure you walk back before the tide comes back in, otherwise you will be stranded!).


We finished up at Chestman Beach pretty early in the afternoon (no we didn't get stranded at Frank's Island, phewff!), so we decided to head into town for a stroll through the city of Tofino. 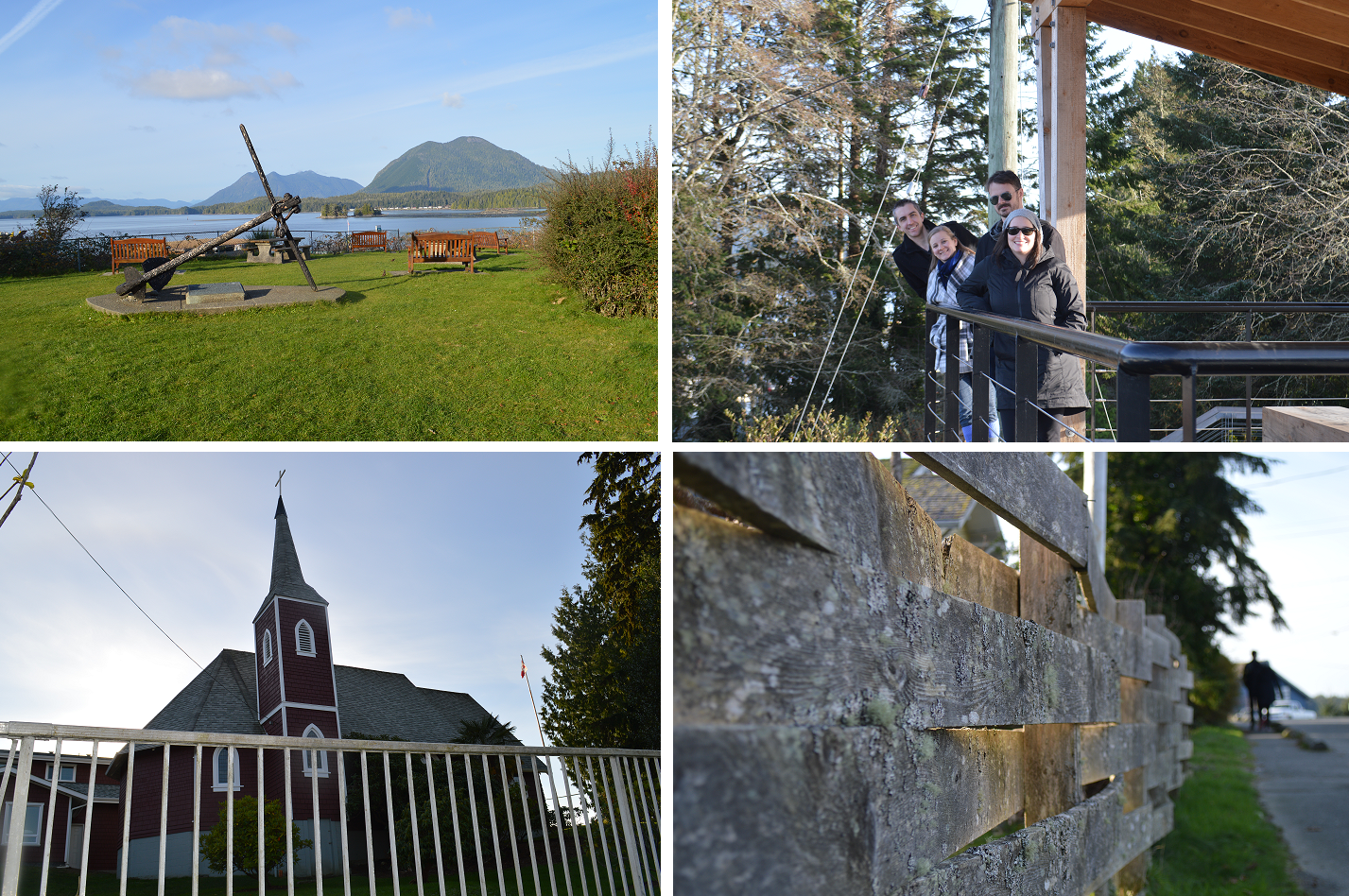 When we got back to the house we all played some Munchkin (one of mine and Mark's favorite strategy card games), and then lounged around the house for while. Eventually our stomachs started to get the better of us, so I got myself dressed up and Mark and I headed back into town for our anniversary dinner (the other couples did dinner on their own and also offered to look after the pup for us while we were out so it was a nice little treat).

Mark and I went to "The Wolf in the Fog". Unfortunately we didn't make reservations so we ended up sitting in the pub area instead of the dining area, but it was all the same food so no biggy. The drinks were ridiculously over-priced and didn't even taste that great, but the food made up for it so all in all it was a nice dinner out together.

When we got back the other couples were still awake. Mark, myself, Steve, and Danielle, went into the hot tub for a quick dip, and then when we got out, all six of us decided to play a game called "Ladies and Gentlemen." This game was hilarious. We played a couple rounds, and did some role reversal which left us busting our guts!

Shortly after that we called it a night, and soaked up the last few hours of relaxation in bed, before having to head home the next morning.

Monday morning we woke early, basically cooked up all our left over food, for a smash of breakfast, and then packed up the house ready to head out. We hit the road around 10:30am and made it to the ferry by about 2pm (of course we had to stop for gas and snacks). We hung around at the ferry (departure time wasn't until 3:15pm) trying to tire the pup out as best we could before being couped up in the car again.


After a full weekend of running around with the dog, playing various board games, enjoying the fresh ocean air, laughing until I was crying, we finally made it back home around 6:30pm. I could not have asked for a better 1st anniversary weekend. I got to spend it with the man I love, my sweet lil pup, and in good company of some close friends. What more could I ask for.

I'd love to hear how you spent, or dream of spending, your 1st anniversary!