Me Being Me Is Exactly As Insane As You Being You 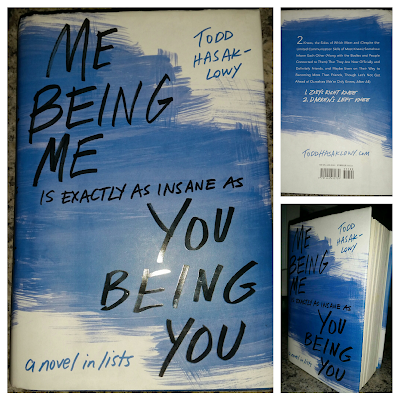 Summary:
This novel is about teenage Darren trying to come into his own after dealing with the following life challenges:
-his parents getting a divorce
-his brother, Nate, moving off to college
-trying to get a paid gig in his band
-falling in love
-his dad being gay
-his mom wanting to move away for her career
-"being with a girl" without really being sure as to why.

Review:
I absolutely loved the way this novel was written. I was a little skeptical by the idea of a novel written in only lists, but it was much more fun to read than I anticipated. Some chapters were super short and sweet, and others were complex and thorough. The read was easy, but because of the unique style, I couldn't put this book down. I thought the overall content of the book was on the amateur-ish side, but the writing style brought it to a new level, and really made the characters emotions seem authentic and raw. I would highly recommend this for any high-school student or young adult looking for something a little quirky.

Quotable Moments:
"He's pretty sure he hasn't thought about kissing any guys, but he wouldn't swear on it, because these kinds of thoughts just sort of pop up whether you want them to or not." pg. 2

"...he never really thought much about the cats most of the time, though he did sort of like how Dell used to greet him at the front door whenever he came home." pg. 27

"...I know I barely talk and pretty much act like I'm not even here, but I'm totally here and have a million things to say, and me being me is exactly as insane as you being you." pg. 65

"1. Holding hands with her and walking quietly down a tree-lined city street. Preferably in the fall." pg. 133

"It's one of those morning-dew, forest-after-the-rain scents that he loves for some reason. Dammit." pg. 405

"Life what if you don't have to be alone in your whale? Like what if that's the point? To find the right person to sit there in the whale with you." pg. 415

What do you think of lists?
-Linds

Email ThisBlogThis!Share to TwitterShare to FacebookShare to Pinterest
Labels: Ink